From ancient times, food and community have been connected, and this with spiritual life.  Sacrifices weren't the surrender of goods so much as the participation of feasts with one's family and friends, held before the gods or God.  One of Moses' tithes was an annual community feast, held at God's temple, which was so rich that ten percent of all their harvest that year was to be used at one time.  To eat together was to be family, even if you were not blood, and to be family was to be unified before God.  From this rich tradition Christians have their mass, and Muslims have their Id.  And Americans have Thanksgiving.

Through a particular, and wonderful, set of circumstances, this group of aesthetics sat down to eat the most scrumptious meal ever presented.  Each course is described in the most delectable detail, and the palate is cleansed between them with the finest of wines.  They are determined not to enjoy themselves but the spirits-- or Spirit?-- fill them and they are beside themselves with joy at this feast.

The film itself is simple and quiet, but full of joi de vivre.  It is like Amelie without the quirkiness or plotting.  Despite the spare tastes of this religious order, the film is full of deep charity, deeper relationship, all of it finally spilling over to overwhelming joy.

The basic conceit of this film is the idea of a group refusing to take pleasure in the most magnificent feast.  How difficult this must be!  And the idea of refusing God's gift of enjoyment of food, the very mortar of community, for the sake of God? Truly an abomination.

However, how much more of an abomination that there could be someone watching this film who did not have enough to eat.  A hungry man after laboring all day watching this film would be horrified at the town's refusal to enjoy what any starving child would take the greatest enjoyment in!  To think that some might have the greatest feasts, while others have nothing.  That some could eat whenever they felt like it, while a billion people go to bed hungry each night.  That there is now an orphanage in Uganda, in the midst of a famine-covered region, where the managers desperately seek to find food for their children, while I am overfull of my wife's soup and banana bread, writing about a movie about feasts.  That is an abomination.

May we all find ways to help the hungry to be fed.  Wherever they are.  Whoever they are.  To deny food is to deny community, to deny God.  Let us feed others, not just ourselves. 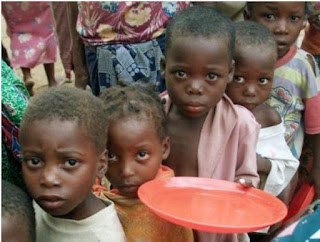