A Dark and Stormy Night, #3: Favorites

Here are some favorite thrillers of mine, as defined in the previous post.  No spoilers are included.  I hope I can encourage you to watch some or all of these classics.

Dial “M” for Murder
A cuckolded husband plots to rid his wife (who had an affair with a mystery writer) and obtain her fortune with the help of a college “friend”.  I recently watched this Hitchcock-directed classic, and it is an excellent example of a traditional formula of the thriller genre.   The husband is so smooth and conniving, Grace Kelly so beautiful and helpless, and the detective smart and manipulative.  It all takes place in a single apartment, there are five characters, a murder in the first act and new twists in the second act.  There is nothing exceptional about Hitchcock’s directing, and there is little innovative in the story itself.  But as an introduction to the genre, it is pitch perfect. 3.5/5 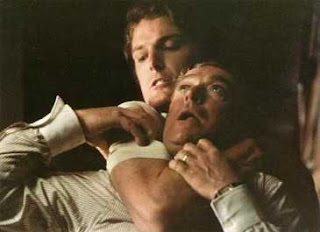 Deathtrap
Two playwrights of thrillers, two women (one a psychic) and a lawyer plot and scheme for fame and fortune in a house full of weapons. One of the greatest things about Deathtrap is that it teaches us about the genre itself.  It stars Michael Caine and Christopher Reeve as writers whose plots become horrifyingly real.  This is probably the cleverest of scripts in the genre, written by Ira Levin who wrote the original novels of The Stepford Wives and Rosemary’s Baby.  The movie is so self-referential it twists upon itself and mocks itself at every turn.  Such wonderful fun. 4.5/5

Sleuth
A cuckolded mystery novelist plots to get rid of his wife… by having his replacement steal his precious jewels?  This last week I watched Sleuth, which inspired me to write this series on thrillers.  It is an excellent thriller about a plot to steal, or to murder, or to humiliate… what actually occurs is hard to determine.  What is clear, however, is that Laurence Olivier and a young Michael Caine are at their best in acting.  They both ham it up, but neither at the cost of the other—rather they play off of each other so well that it is clear this film was a joy for them to work together. 4/5

A note: Sleuth is difficult to find, as it has not been released on DVD.  However, it is available, as a whole, on YouTube:

My favorite thriller is:

Rear Window
A journalist is stuck in a wheelchair in his apartment (and Grace Kelly) with nothing to do but peep into his neighbors windows—but he suspects one neighbor of murder!  It could be questioned as to whether Rear Window even follows the formula.  But I think it does as long as you don’t mind bending a couple rules.  The two acts aren’t so clear, and most of the action doesn’t take place in the apartment our hero is trapped in.  Yet this is the least intellectual, most psychological of thrillers.  What happens in the bottom apartment is simply one act in a whole human menagerie, where a whole host of stories take place.  If the various apartments are red herrings, they are the most fulfilling of them.  And what happens to our three “heroes” becomes important to us.  I believe that Rear Window is the most perfect thriller ever made, and it gives me great pleasure to watch each and every time.  5/5
Posted by Steve Kimes at 7:48 PM