The Otherworldly Jesus in Film

If you want to keep your Christian audience happy, you want a Jesus that is pretty much out of this world.  Not like an alien (although the main characters in Starman and Knowing were pretty Christ-like), but a Jesus that isn't like the rest of us.  Someone who seems to come from another dimension.  Let's look at a few films that make that choice for their Jesus: 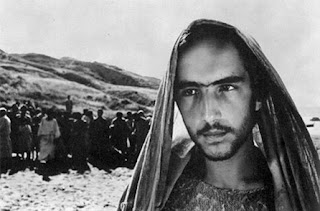 The Gospel According to St. Matthew—This is an Italian film, made to represent a traditional view of the New Testament book.  Every spoken word comes from the book, as close to the text as possible.  And every scene looks like it belongs in a stained glass window.  Jesus himself is very handsome, so he’s nice to look at.  He’s primarily a teacher who does the occasional miracle.  But the problem with this interpretation of Jesus is that it doesn’t really say anything.  One example is the teaching montage.  Jesus is seen as speaking familiar teachings, most of the Sermon on the Mount and other teachings, one line after another in fifteen minutes.  But it is without context, and it is edited so close together that we don’t have time to hear what he is saying.  We hear a familiar line then whoosh! we’ve got the next one halfway done.  Just like how Scripture is often read in church. While the overall portrayal gives the film a saintly veneer, it also is pretty boring.  We could go to a church and get the same experience, and we can meet interesting people at the same time.  There is no real insight given in this film at all. Jesus-2/5 Film- 3/5 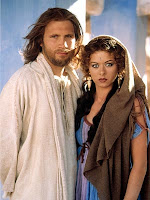 Jesus (1999)—The boy band Jesus.  This Jesus is a celebrity.  He knows how to work the crowd, how to use the blowdryer on his hair to let the wind give it that lift. Hip yet nondescript.  Complete fail.  Jesus- 0/5 Film-1/5

The Gospel of John—(Or is it the gospel according to Lost?-- Henry Ian Cusick who plays Desmond of Lost plays Jesus in this film)The irritating Jesus.  I know that the script comes just from the gospel of John, but the way it is performed… well, we can see why THIS Jesus was crucified.  He keeps implying that he’s God and then he insults the people he’s talking to.  And he is a equal opportunity offender—the “Jews”, his disciples, his apostles—they all get insulted at some point in the film.    I know that the text all comes from John, but Jesus doesn’t have to be so personally angry when speaking it.  The “Matthew” Jesus had it better, with more scorching text: you are preaching, not interested in personally insulting.  You can speak harsh statements with a more general delivery. Jesus- 1/5 Film- 2/5

Jesus (1979)—This film is actually an edited version of a filming of the entire gospel of Luke.  Because the purpose of that original film was to film every verse, in context, of the Gospel of Luke, this Jesus feels very textual.  The English is a dubbed over the original Greek, the settings are from Israel, all to give a very authentic feel.  To me, it just feels flat.  It is a good version of the book, but I might recommend a person to just read the volume.  The Jesus of Luke is much more socially radical and more energetic.  Jesus- 3/5 Film- 3/5

Jesus of Nazareth—Probably the best portrayal of an otherworldly Jesus.  He floats from scene to scene, doing good, speaking wisdom, but he is always focused on something else… another dimension.  His eyes are focused on people and things no one else can see.  It is stunning, but unnerving.  It is rumored that Robert Powell took drugs on set to give him that mystic-look.  In fact, Powell was given make up to accentuate his blue eyes, and he never blinked while the camera was focused on him.  The effect is that Jesus doesn’t seem to be responding to other people, just speaking his lines in the most gentle, saintly manner ever.  We can see why people would love this Jesus, but not why he would be crucified.  Still, marvelous job. Jesus-4/5 Film-4/5

You might notice that I didn’t review the King of Kings’ or The Greatest Story Ever Told’s Jesus.  Frankly it  is because I can’t bring myself to watch these traditional American films on Jesus.  If you feel I should watch them, let me know.  And tell me why.

Of course, as Kenny points out, if you portray a Jesus that is so completely different, then you will end up with a Jesus whom no one can relate to.  In the next post, we'll look at Jesus' that are more down to earth.
Posted by Steve Kimes at 7:21 PM

Email ThisBlogThis!Share to TwitterShare to FacebookShare to Pinterest
Labels: Henry Ian Cusick, Jesus (1979), Jesus (1999), Jesus in Film, Jesus of Nazareth, King of Kings, Robert Powell, The Gospel According to St. Matthew, The Gospel of John, The Greatest Story Ever Told