We Should Do Something About Us Fanatics

When I was a junior in high school, I took biology.  At that point I was an outspoken conservative fundamentalist Christian (now I am an outspoken social justice Christian... some would say I haven't changed much) and was waiting for the teacher to say something about evolution.  I didn't believe in "evolution", or what I thought was evolution at the time.  I realized years later that my conception of the science and the Bible were misguided, but at the time I held the fundamentalist belief that evolution was at best an error, and one that stands against God.  Although I had no interest in having a debate about evolution with the teacher, and didn't really want to say anything about the subject, I was not going to allow the teacher to compromise my beliefs.

Finally, the fateful day came and the teacher announced that he was going to be teaching on evolution.  His introduction included a statement which basically said this: "There are some who don't believe in evolution because of their religious beliefs.  I just want to make sure you all know that anyone who chooses their religion over what science says is stupid.  I am not here to teach stupidity.  I am here to teach science. Does anyone have anything they want to say on this subject?"

Perhaps you might think that this discouraged me from saying anything.  If so, you obviously don't know me very well.  If he had said anything other than insulting that which I believed, I would have let it pass.  But I had to say something.  So I raised my hand and he allowed me to murmur something incoherent about Genesis and biblical creation.  He allowed it to pass without comment, and, after seeing that no one else had anything to say, went on to teach what he needed to teach.

This is the incident I think of when I hear people speaking about the film Jesus Camp.

Jesus Camp is a documentary about a Pentecostal camp for children that train them in preaching, praying and conservative right-wing ethics, especially about the evils of abortion and evolution.  The children, ranging in elementary school ages, are taught and teach each other about these common religious views, which they all seemed to hold before they came to the camp.  The documentary has little commentary, and just observes what happens in the camp, although emphasizing some of the more dramatic (and so more interesting) events.

When I watched the film, I found it to be an interesting sociological piece of Pentecostals, whom I've already studied and taken in what I thought was positive about the group and left the rest behind.  What is interesting to me is the reaction by many who have seen it.  Most everyone considers the camp to be disastrous for the children, and those who taught at the camp to be monsters, both for the content of their lessons, and also for their teaching method.  A common reaction is to call the teaching "brainwashing" or "manipulative."   To call the teachers "stupid" or "biased."

The first time I heard this reaction, I was confused.  These are children raised by Pentecostals, and the teachers are conservative Pentecostals themselves, and this is what Pentecostals teach.  What did they expect? 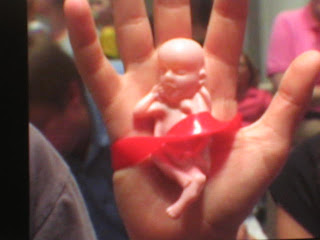 I understand that in a science classroom, we should only teach proven science.  That's appropriate because that is what that class is for.  Even so, no one should expect that a class on religion should present a "balanced" view of religion.  Sure, it would be great if the teachers of one subject or another would respect another side.  Perhaps they could have a discussion with the children offering their own thoughts.  But that's not the way it works.  Because the education of the young isn't about critical thinking, but rather about pedatics.  Critical thinking is taught (if one is lucky) in the late teens, or college.

Why complain that Jesus Camp is full of teachers teaching what they believe?  That's what teachers do.  All teachers.  Please don't expect objectivity in churches, in school, in parents or in yourself.  We all have beliefs and we all "teach" these beliefs.

And don't worry about children being "brainwashed."  Yes, children are taught a single perspective-- usually the perspective of their parents-- and are raised to think a certain way.  But this is the wonder of the teen years.  Those "brainwashed" kids will often rebel against the thoughts of their parents and think on their own.  So don't be worried about kids who are taught the "wrong" ideas when young.  You should rather be worried about your own kids who were taught all the "right" things by you.
Posted by Steve Kimes at 4:25 PM