If I Were Directing A Jesus Film

I’m not a director or screenwriter or actor.  I'd love to write a screenplay, but I know how tough that is. A rank amateur like me shouldn't try it.  At the same time,  I don’t think I could hurt anyone by giving some tips to the next person who wants to bring Jesus to screen.

A special note to Chris Columbus:  (Director of the first Harry Potter film)  So I hear you are going to do a movie based on Anne Rice’s book Christ the Lord: Out of Egypt.  Wow, I wish you luck.  It’s not a problem.  After all, displaying fantasy and science fiction is your specialty.  But please don’t think you are making a REAL Jesus movie.  Still, it might be fun to portray ancient religious novels on the screen. That's where Anne Rice went for her sources for this material-- religious novels about Jesus from the early third century on.  But I don't need to tell you that, you probably already knew.

Here’s my real tips (for someone who is filming a real Jesus film): 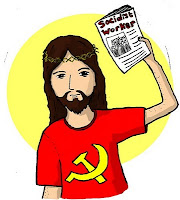 Jesus was socially conscious.  He was trying to open up the temple to women and non-Jews.  He related to the poor and the socially outcast.  He was trying to give real solutions to difficult problems, with a religious spin.  Show that.  Don’t make him so heavenly minded that he is no earthly good.

Jesus was a radical, not a revolutionary.  He opposed the status quo, but determined that martyrdom would do more than revolution.

Try to keep the balance of attitude.  Jesus wasn’t gentle and mild, nor was he a jerk (usually).  He was an intellectual who went popular and was very clever.  He was smarter than anyone else around him.

Try to keep to a historical Jesus.  There are too many pitfalls in making a Jesus in the "here and now".  Have you ever seen the film Joshua (2002)?  Awful.  But in keeping to a historical Jesus, ignore the many books people will want to give you. There are a plethora of modern scholars to tell you who Jesus was “really” like.  Ignore them all.  Just stick with a gospel.  Luke is still relevant, but no one has done Mark, and Mark is the “action” gospel without so much teaching.   Focus on what Jesus did, but read the text yourself and make your own interpretation.  That’s what Tim Rice did with the original writing of Jesus Christ Superstar, and though the movie was pretty silly, the original libretto and lyric are deeply insightful.

Jesus had fun.  He had a wry humor and used hyperbole and puns to good effect.  I mean, “Don’t take the speck out of your friend’s eye if you’ve got a plank in your own.”  That’s good stuff.  Put that kind of humor in there, if it doesn’t seem too weird.

Anyway, I'm not trying to tell you what film to direct or write.  I guess what I'm saying is, let's keep it real.  Jesus was a real person, and the ancient writings don't make him too "holier than thou" and yet a person really focused on his goals.
Posted by Steve Kimes at 8:37 PM

Email ThisBlogThis!Share to TwitterShare to FacebookShare to Pinterest
Labels: Jesus in Film, Joshua (2002)