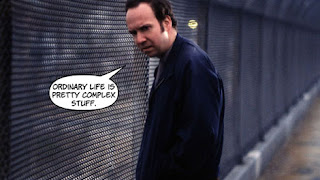 Why would someone write about their own dull, everyday existence?  Well, it’s what Harvey knows.  And shouldn’t he have an outlet?  Shouldn’t he be able to express himself?  Isn’t that what millions of blogs on the internet provide?

And Harvey was moderately successful.  He’d never compete with Batman, but he didn’t do too badly.  And some consider his comics, especially the ones that he wrote with his wife about his struggle with cancer, to be art.

Live art and turn that life into art you share with others.

Fun Fact: After the film was released, Harvey wrote another comic book called American Splendor: Our Movie Year.  Interesting follow up to the movie about how an average guy can get lost in the whirlwind that is movie marketing.