Very theatrical, great stage, great script, fantastic actors.  It hardly matters what else you put in the film, that's seems like enough.  But that's not all that's here.

It begins darkly, letting us know that our setting is considered a garbage heap, and our focus characters for the next couple hours are garbage.  But they are deeply human garbage.  The brutal thief in love with the oppressed inn girl.  The drunk actor, the angry tinker, the dying wife, the commitless gambler, the wise old pilgrim.  And, of course, the greedy innkeeper and his faithless wife.  Garbage?  Perhaps, from one perspective.  But reflections of our true selves, enhanced by poverty.

This film is really all about hope.  Yes, a few glory in their past, but for most of the poor, hope is their bread and butter.  Hope for more money, for a good spouse, for sobriety, for complete rest.   Just as the poor today might hope for the lottery or for someone to give them a safe place to sleep.  It is said that hope does not disappoint, but the poor know better.  Hope is rarely realized when you are impoverished.  But that doesn't mean that your life isn't about that hope.  Even when you understand that hope is a lie, you cling to that lie because without it despair floods you and you are over. 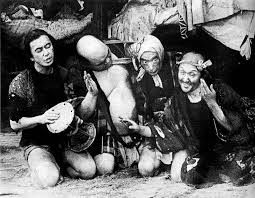 The most wonderful aspects of this film is when it suddenly turns vaudeville, as if Kurosawa invited the Marx Brothers in for a scene or two.  There is singing, running, dancing and silly humor.  Because, as Sullivan's Travels reminds us, what the poor needs most isn't money, but an opportunity to laugh and to forget their troubles.