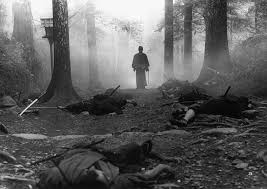 If "Sword of Doom"  (1966) were a title for a fantasy for sci-fi film, it would be awful.  But if it's a samurai film, you've got to give it a chance, because it could be great.  Especially because it is certainly not the original film title.  The original title of Sword of Doom is actually, directly translated from Japanese, Great Bodhisattva Pass.  Okay, so that's not such a great title, either.  But my friends say that it's worth giving a shot.

And I'm glad I did.  It is amazing.  The darkest samurai film yet.  Samurai-noir.  The Psycho of samurai films.

Ryunosuke Tatsue is a samurai of the 17th century, and he is cruel.  It is the adjective applied to him again and again.  And it cannot be denied that if there is a way to grant more dishonor to his opponent, he will take it.  And he has a really unique style of swordplay, in which he mimics a fish out of water, ready to be gutted and just as his opponent comes close, he guts them instead.  It never loses.

This is a character study of this man, and a study of how his opponents try to finally defeat him.  As a study of an evil character, this is one of the best.  There are points in this film that can be compared to the dark view of Unforgiven, but frankly the character portrayal here is better, less obvious.

The final quarter of the film it blossoms into one of the best films I've ever seen.  The acting is superb, and the descent brilliant.  The use of the camera and shadows are fantastic, as well as the scenes in the snow.  Darkness descends and no one escapes it. Nakadai helps us see aspects of the character not in the script by his subtle but powerful face expressions, even though his body can remain completely still.

Another great aspect of the film is the balance between story and choreography.  I love the fact that in samurai movies it isn't all about the battles, but about character and relationship.  But you know, I like a good duel as well.  In many of the samurai movies I've seen recently, choreography has taken a back seat to story, and this isn't bad, but let's say that it's a bit disappointing at times.  In this film, the duels and battles are fantastic, intense, and the story is suspenseful and as dark as they come.

I am shocked I would be saying this, but I'll have to put The Sword of Doom above Harakiri for great samurai flicks (but still below Seven Samurai).

One of things I love about this film are the deeply disturbing things that Ryunosuke Tatsue does.  He kills pilgrim in cold blood.  He accepts sexual favors from a man's wife to keep her husband from losing a match, and then he kills her husband in the match.  He accepts her as a mistress, only to remain aloof and hateful and he eventually kills her, leaving her infant screaming alone in the night.  And he does all this with a cold lack of consideration that one might give the dispatching of a gnat.

If you know me as a reviewer, you might think that this is exactly the kind of movie I wouldn't care for, focusing on such an evil character.  Well, there are good characters that play out in his story, like the noble sensei played by Mifune or the young samurai that must confront him against all odds.  But frankly, it is Nakadai's character that strikes me.  Yes, he is an evil man, but in unexpected moments he would realize that something is wrong about his approach, his life.  For instance, the scene where Mifune must fight off a horde of samurai assassins, Ryunosuke is motionless, struck with the impact of what played before his eyes.

Why did he stop?  Why didn't he simply run, since he didn't want to participate in the assassination?  Why didn't he go ahead and finish what was started?  Some say because he realizes that he could have been defeated.  But I wonder if that is his focus.  He seems horrified.  Perhaps it is the beginning of a moral conscience.  He had said before that they shouldn't fight if their target wasn't there.  Mifune was there instead, and his fellow assassins decide to attack.  Perhaps he is beginning to see what an evil act actually looks like. And perhaps he is realizing that he has participated in such acts himself.

If that is the case, it opens up the final scene of the film more.  Ryunosuke is sitting in an off room in a brothel, waiting to fulfill his latest assassination.  Suddenly ghosts appear which frighten him terribly.  Who are these ghosts?  The souls of those whom he had killed.  But these ghosts weren't there, they were only in his mind.  A man such as he develops irrational guilt along with a moral conscience.  And these ghosts lead to his destruction.  We see him participate in a long swordfight with many opponents, and it looks hopeless.  But before we are sure, the movie ends.

I guess this movie was planned to be the first film of a trilogy.  It is actually based on what was, at the time, the longest novel ever written (1553 chapters long), and it was certainly supposed to continue.  It makes me wonder, where would the story have gone?  Would Ryunosuke have survived this attack, and develop his moral character more?  I can only guess that this would be the case.  How I wish it had been continued.