I have made a momentous decision: This summer I will have a marathon of Samurai Movies!

I don't know why.  Why does anyone do anything?  I like samurai movies, I don't feel like I've watched enough of them, and now's as good as a time as any.

I will be watching a number of films I haven't seen before, like The Samurai Trilogy and Sword of Doom.  I will probably drop in a couple favorites I've already seen like Ghost Dog: Way of the Samurai and Seven Samurai.


Here's a couple reviews to get us started: 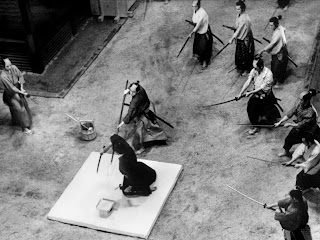 All I can say is, watching this at the beginning of the marathon, it will be a tough one to beat.

The best of all possible movies is a marvelously scripted one which is marvelously played by marvelous actors.  And that is what we have here.  The script unfolds like Rashomon… or perhaps like the end of a Colombo mystery… step by step pulling us in, revealing to us a bit more truth.   This is the very rare samurai movie where action is almost unseen because it is about people and events, carefully plotted, carefully paced.

The centerpiece performance of the film is played by Tatsuya Nakadai, who here is equal to Mifune at his best.  In fact, I wonder if Mifune didn’t borrow some of Nakadi’s inflections for his performance in Red Beard a few years after Hara-Kiri.  But I also have to laud Rentarō Mikuni, who played, but didn’t overplay, the perfect foil.   The conversation between these two was not only believable, but grew in intensity as the film wore on.

The only weakness I would have to give the film is the choreography at the end.  The action suited the plot well, but it was simply unbelievable.  Let’s face it, our hero should have died many times over, and it was obvious with what we saw.  But that’s just five minutes of cringing for me in the midst of two hours of 12 Angry Men-level  performance.  It’s worth it.

One thing I noted is the placement of this film historically.  It speaks of the habit of ronin (masterless samurai)  asking to commit suicide in a town in order to obtain money.  This particular town is horrified at the dishonor of the samurai and determines to force honor, even if the samurai has no honor themselves.   This film was made in a time when Japan’s suicide rate soared, and people were desperately impoverished after the end of WWII.  I wonder if the film isn’t encouraging those contemplating suicide to not do so, but to fight back.
But even today, it speaks to  all societies of a too-high code of honor and how that effect the most vulnerable parts of society. 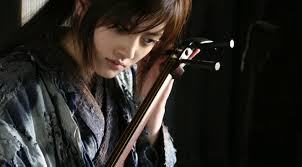 
As much as Hara-Kiri wasn’t about the choreography and battles, Ichi is full of them, with plenty of blood to go around.

Ichi is a goze, a blind woman who has learned the trade of playing her musical instrument in order to make her living.  And she also learned a few tricks with her hidden blade in order to protect her from unwanted attentions.  In these tricks, she is a master and always takes her opponent by surprise.  She runs across two friends,  Toma, a samurai inflicted with trauma, and Kotoro, a boy who wants Ichi to be his stepmother.

There’s some fun action, but the plot is full of tropes from the Zatochi stories as well as Yojimbo and the occasional nod to spaghetti westerns and John Ford.  In the end, this is a comic book, and it has the feel of one.  It is interesting that it is distributed by Funimation, a company best known for their anime series, because this film could easily be one of their middle-of-the-road series.  Most telling is the bad guy, head of a series of bandits that have overrun the inn town.  Honestly, he reminds me of no one else more than Quentin Tarantino, the actor.  I mean, really, did he look at Tarantino’s films and say, “I want to be just like that guy.”  Not just when Tarantino is trying to act, but in his most gut-clinching overdrawn performances.  Wow, that was bad.

There’s nothing believable here, but it’s still a decent action flick to while away the time.  3/5

P.S. I almost forgot my favorite part of the film where they keep looking for an unnamed blind samurai.  They never find him, but find out that he passed away before the film began. If you know your samurai lore you know that this is Zatoichi, the famous blind samurai.  Awesome