Japanese Civil War: The Last Samurai, Samurai Assassin and When the Last Sword is Drawn

In the 1860's, Japan's economy took a major turn, depending more on foreign trade than ever before.  This led to a conflict between the Emperor, who, by the end of the 1860's was under the thumb of the foreigners, and the Shogun, who wanted to retain power for his military class, the samurai. This eventually lead to some skirmishes and also to all out war between the forces of the Shogun and the Emperor in 1868, where the Shogun was defeated in Edo and the Shogunate was dissolved.

This era of Japan was made into many films in Japanese theaters and television.  It is a dramatic time and the stories from this time heighten the tension and the challenge to samurai at the time.  Although it can be questioned as to the nobility of the samurai at the time, yet most films display the samurai as noble and loyal to a fault, which is seen as a great ideal to follow.  Here are some words on a few of the films on this era, two Japanese and one American. 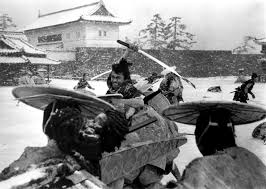 This film takes place in 1860 at the beginning of the tension between the Shogunate and the Emperor. It is showing dissent amidst the ranks of samurai, all trying to respond to the coming of the West in force to Japan.

The clan of Mito determines that the Elder of Il must be killed, for the sake of the strength of the Shogun, and they collect a variety of samurai, including ronin (master-less samurai) to accomplish this task, but there is a traitor in their midst.

Of course, one of the ronin samurai is Mifune, who plays Niiro Tsurichyio, son of a concubine who's father is unknown. He is trained as a samurai, but his temper gets the best of him. Of course, he is the most skilled of samurai, and somewhat of a rogue. But this is only because his ronin class left him in poverty and disgrace, not even able to obtain a wife, let alone the woman he truly wants.

The first half of the film is dull, with much explaining, political discussions, and narrative-based action. But it is all giving the necessary background for the second half, where the truth is opened up.

Although much is spoken of honor and principle, it all descends into savagery and the worst of violence. It is a good reminder to us that we can get so caught up in secondary issues that we lose sight of the important issues of honor and morality. It reminds me of a modern political thriller, where corruption rules the day, even by those who seem so noble on the surface.

By the end, it is horribly wonderful.

This film takes place throughout the era, ending just after the defeat of the Shogunate.  It is a biography about Yoshimura Kanichiro, who was, in history, in service to the Shogun and was eventually defeated by the emperor's forces.

The film depicts him as much misunderstood because of his complete humility. He did all his strange (for a samurai) actions for the sake of duty to his family and to his lord.

I am amazed that this film won so many Japanese awards. It is unfortunate that this good story was told so poorly. Every emotional scene felt so manipulative, not because we shouldn't feel emotion, but for some reason it seems adequate to lengthen a scene and have characters repeat each other's names for emotional resonance. The final half hour of the movie could have been presented in five minutes-- Boredom is an unfortunate way to end a film. And instead of emphasizing our hero's nobility of duty despite opposition and mockery, it emphasizes dying in battle as a noble honor.

I'll give it a passable 3 out of 5, only because the heart of the film has a good depiction of a controversial figure. 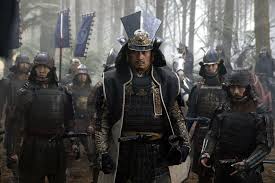 The Last Samurai famously stars Tom Cruise who arrives in Japan just after the Shogunate is defeated and is asked to help dispatch some of the rebellious samurai forces that still exist.

As an American epic, it has some eye-rolling cliches that took me out of the film. As a samurai movie, it cannot compare to the classics of that genre, but like those films, it discusses the matter of honor with some subtlety and interest.  The action was, in a sense, less realistic but more effective than most samurai films. As a movie that explores the connection between the East and West, it completely fails, but I"m not sure how much it was attempting to explore cultural connections.  But in the end, it is not a bad film, if not a great one.

What is this?  Like Avatar and Dances with Wolves this is a movie about an American teaching an indigenous tribe to fight for themselves.  Because an American has to do this, they wouldn't figure it out on their own.

Frankly, I still think Avatar is the better movie, not only because it's prettier, but because it is not a "movie about Japan" or a "movie about Indians", it is rather a movie about all subdued, oppressed cultures and so can represent all of them.  I wish it weren't necessary for an American to be the hero.  Why can't an aborigine travel abroad and become the hero for their own people.  I understand the cross-cultural element is necessary, but why always make the American the hero?

Nevertheless, I have to give The Last Samurai some kudos.  Tom Cruise played his role with tact and, at times, humility.  When he gave the honor to others, it brought tears to my eyes.  I don't care what nationality it is-- American, Japanese, or Na'vi-- when a man of pride and arrogance surrenders himself for another person or nation, it is of the greatest honor.
Posted by Steve Kimes at 1:28 PM