Humanity and Nature: Nausicaa of the Valley of the Wind

#3--Nausicaa of the Valley of the Wind

Nausicaa takes place a thousand years after human war has poisoned the soil of earth to such a degree that poisoned jungles grew up, insects became gargantuan and huge protectors of nature were created-- Ohms.  There are a number of human kingdoms, but the film deals with only three, Tolmekia-- a war-like kingdom that wants to rule the others; Pejite, the sworn enemies of Tolmekia; and the Valley of the Wind, a struggling utopia that gets caught up in the other kingdom's war. 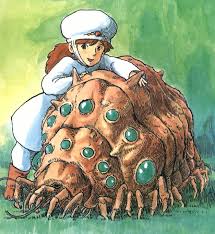 Nausicaa herself is Miyazaki's saint-- the ultimate peacemaker.  She is frankly an ideal Buddhist saint, who communes with all creatures, and seeks to make peace with all.  She is especially focused on creating harmony between humanity and nature, trying to heal the 1000 year old rift.  Throughout that thousand years, the poisoned jungles and humanity have been warring with each other, each attempting to overthrow the other's rule.  Only Nausicaa realizes that humanity would perish without the jungle and that the jungle can flourish under humanity's enlightened guidance.  Nausicaa is somehow able to understand the true nature of whatever she is facing.  Instead of reacting to a threat, she responds to the fear behind the threat.  Instead of seeing the death of the toxic jungle, she sees the beauty of it.  She works with the nature of whatever is before her in order to create harmony with all creatures.

Honestly, the scene with the fox squirrel both amazes me and it is symbolic for the saint-like way Nausicaa acts throughout the film.  Master Yupa warns Nausicaa that the fox squirrel is dangerous, but she treats the small creature as if it were the cutest thing in the world.  To prove Master Yupa correct, the fox squirrel bites Nausicaa on the finger and won't let go.  But instead of reacting to her pain or to an attacking creature, she still coaxes him, comforting him.  She understands that his attack isn't personal, but a reaction to his fear.  She allows him to attack her, with no repercussions so that he can know that whatever he does, he has nothing to fear. Fear is the source of harm, the source of attack and oppression. Throughout the film, Nausicaa is placing herself in harm in order to convince others that there is nothing to fear, no need to attack or oppress. This is peacemaking in action.

On the surface, this film seems weaker than other Miyazaki.  Most Miyazaki are amazing in the detail of the world that was created for the film, and Nausicaa is no different in that.  But the dialog is less rich and entertaining, the colors seem washed, and the style of animation is not as fluid as other Miyazaki films.  Part of this, though not all, is due, I think because Miyazaki is trying to communicate the bleakness of the world in disharmony with nature.  War-- both human and natural-- has taken its toll, draining life from everything.  At the end of the film, [spoiler]after Nausicaa's messiahship is realized[/spoiler], the colors suddenly are brighter and everything changes.

Despite it's weaknesses (including a truly lame 80s score), this film is one of my favorites of all time.  Despite it's bleakness, it is possibly the most joyful and optimistic of Miyazaki's films, and it plots out the general outline of hope for the future.  Other Miyazaki films may communicate that war is bad and that bad guys aren't really all that bad, but this film actually lays out what would need to be done to end war, to change people's hearts.  It isn't childish in any way, nor simplistic, if perhaps naive.  It communicates that self sacrifice, listening to the another's heart, boldness for another's good and some basic reasoning can create a path out of the bleak world.

Perhaps I like this film because it is very much a religious philosophy I agree with.  Perhaps it is because Nausicaa is such a strong character that to me she is the perfect moral hero.  But with each time I watch it, the higher my estimation of it is.