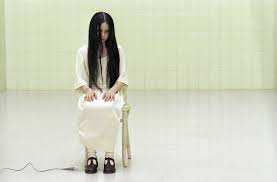 Why then is the very end of the film about sharing the David Lynch-esque video? Of course, to avoid death. But why would the ghost want this done? First of all, I think that the death of Ryuji is simply to get back at his abuse of his wife. But it seems that the deaths end because of the spreading of the video? Probably, like David Lynch, the author of the video is an artist and she thinks that she is really communicating something about abuse and suffering through her video and so wants it shared with everyone. Of course, it took the whole length of the film to find out what the video meant, but artists don’t always get that.
Posted by Steve Kimes at 9:37 PM