Day 10 - A Film With Your Favorite Actor (Female)


I had a really hard time with this.

IS there an actress that, by herself, would cause me to watch a film? Not really. Although I could also say the same for actors, it is less the case for them. If I knew a certain actor was in a film, I had a general idea what kind of film it was—a film with action, a film with great acting, a light-hearted film… whatever.  But in modern film, actresses rarely set themselves apart except in romantic comedies. 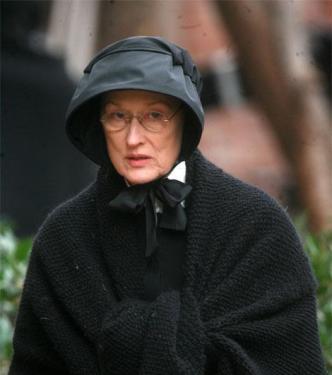 But the one actress that would make me consider a film that I might otherwise not is Meryl Streep. Often she can cause even a light film be worth my time. Only because of her presence would I even consider a film like Julie and Julia. But the performance of hers that recently stunned me was her character Sister Aloysius Beauvier in the film Doubt. Wow, did I dislike her. She is everything I hate about religion. And yet she is so compelling, I can’t turn away from her when she is on screen. Amazing performance.  It's not my favorite film that she appears in (that'd be Adaptation), nor is it my favorite performance by Streep (Sophie's Choice), but it is the most stand out performance.
Posted by Steve Kimes at 7:39 PM