How Can Corruption Be Defeated? (Chinatown, 1974) 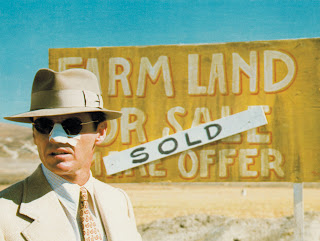 Jake is a private investigator, of the old school variety.  He takes cases from suspicious dames, gets beat up on a regular basis, and speaks in staccato.  It was an everyday case to follow a husband to see if he is cheating on his wife, but it turns into something much deeper, much darker and more sinister.

Often truth is something we simply don’t want to know.  We always think we want to know the reality, the real motivations behind things, the facts of the matter, but often the only thing truth can do for us is depress us.  Jake found out not only about the corruption of innocent women, but about how Los Angeles became a power, created by evil men.

Jake would love to right this injustice, to repair the wrongs, to defeat evil.  But it is too complicated, too insidious.  Were he to defeat evil, the good would be harmed.  The corruption is too deep, too many people involved, and nothing can be done about it.  This is the state of Los Angeles, the United States, the whole world.  All anyone can do is throw up one’s hands and say, “Forget it, Jake.  It’s Chinatown.”

This sounds like a cop-out.  Perhaps in some way it is.  But it is also a recognition of reality.  The only way to weed out the evil is to take the good with it.  Is that really justice?
Posted by Steve Kimes at 8:30 AM