Review and Meditation on Dancer in the Dark 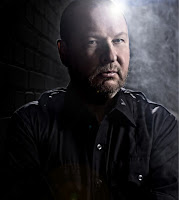 Acting is a brutal art.  To accomplish a real act of drama, not just a light and frothy musical scene, but deep sorrow and regret, requires something from one’s soul that must be torn out.   Bjork, the star of the 2000 film, Dancer in the Dark, said that the role of acting in this film was so emotionally wrenching that she would never act again.  She also may have given a hint that the director of extreme film, Lars Von Trier, could be the cause of this.  She had nothing good to say about him after the filming, calling him “sexist.”  Is it because he was demanding sacrifice more than she could give for the film?  Certainly he is more demanding of his female characters than his male ones.

Sacrifice is never pretty.  Some demand our sacrifice, some compel us to sacrifice ourselves for them.  Most people don’t want anyone else to sacrifice for themselves.  They can take care of themselves, take care of their own.  Certainly Selma, the focus of the film, wanted no help.  Yes, she had a genetic disease, a sight disorder that had just about made her blind.  Her son has the same disorder.  But she has a plan.  She will work hard and save the money necessary in order to get her son an operation so he can see, and end the curse on her family.   It turns out that the cost was going to be much higher than she expected. 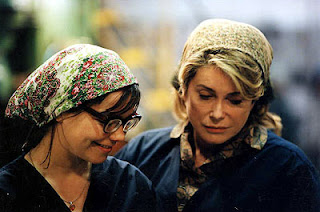 Selma loves musicals.  Although her life is focused on her son, her one real joy is music and dance.   Her friend, Jeff, wonders why she would love musicals so much.  “I don’t suddenly break into song and dance.”  “No,” Selma replies, “no, you wouldn’t.”

But Selma does, in her mind.  She can hear the rhythms of everyday life, the beats of the factory, the pounding of a train, the sketching of an artist and turns them into songs.  She is the star of her own musical.  But like the film, the songs aren’t rushed, nor do they have a tight melody.  They linger in emotion, momentarily hesitating and then rushing past the natural beats.   They dance around, perhaps even fight against the very rhythm that is their source and pulse.

So this film, with its documentary cinematography, musical sensibility but ultimately brutal nature is almost unnatural, fighting against the limits of our mind and demanding that we, too, sacrifice ourselves.  It is no-holds-barred cinema.  Not for the squeamish or overwrought.  But it’s hyper-drama may be what some need to retain hope.  Yes, hope.

Like the train, though, the songs move forward, as does the film, pushing along.  As Selma’s eyesight fades, so the film becomes emotionally dark and Selma’s path toward her goal becomes more difficult, even brutal.   Despite the darkness that she can no longer ignore or hide, she is determined to reach her goal, no matter what it costs, no matter what she must sacrifice.

In the end, Selma is the scapegoat, the sacrificial lamb, the one whose life must be laid down for the sins of others.  She is the innocent one, the pure unblemished offering.  Through her is healing, through her is mercy, through her the guilt is washed away.

Watch her.  See how she is kindly brutalized, but she responds to all with gracious kindness and acts of mercy.  See how she is there to bring life and to heal life, to give precious gifts through her own veins.  Look at the glorious victim, one moment unable to stand, and the next joyfully accepting her fate!  Glory to the precious redeemer, tied to the beams and hung for our errors, the innocent for the guilty.  All we like sheep have gone astray, we have turned everyone to his own way, but the Lord hath laid on her the iniquity of us all.

This is the greatest, truest passion of them all.

This is the state of the poor.  Selma works and does all she can, but nothing comes of it.  Because of her kind nature, and due to her human weakness, more is demanded of her than she can give.  She gives all, but it is not enough, there is always someone… more than someone… who demands more than she can give.  It is the way of the world.  Those who are kind and have little, more is demanded of them.  More than they can give.  Eventually, broken and bruised, brutalized and beaten, they surrender all for the sake of those they love.

But this is not the end of the story.  There is still hope, there is still a future.  While the poor do not see justice in their lives, it exists in the future.  They will be praised for their sacrifice.  The slaves, the falsely accused, the abused, the oppressed, the outcast—they will have their day.   This is not the last song.  We can just hear glimpses of the melody.  We know the last song is coming.  We just need to wait.

This last song is not for the pillars of society, the powerful, the respected, the comfortable.  They have had their chance, their song.  Those who see the penultimate song and call it the finale.  If they partake in the last song at all, it will be in a supporting role, for finally the weak who supported these pillars on their backs will have their due.

“It will be a day like this one when the sky falls down and the hungry and poor and the wounded are found.” -Switchfoot
Posted by Steve Kimes at 1:42 AM