How Far Can the Mystical Powers of Kung Fu be Stretched? (Kung Fu Hustle, 2004)

Stephen Chow has been making martial arts comedies for many years.  They all have the same style, take a hokey, but typical, Hong Kong plot and add various physical and verbal jokes, giving us the right to openly laugh at the films we have wanted to for so long.  Chow has not only improved as a director, but also as an actor, making films like Forbidden City Cop that has some good dramatic scenes as well as some decent comedy.

A gang of criminals come to attack an apartment building and Stephen Chow is first an ineffective criminal and then a master defender.  But the plot can be tossed aside.  The brilliance is in the style.  This film could just as well be called Flying Coyote, Hidden Road Runner.   It has all the fun and majesty of the flying martial arts movies, with a Looney Tunes sensibility and the finesse of Roger Rabbit with a sledgehammer.

This is physical comedy at its best, where every master is a citizen of Toontown and any non-master had better clear out of the way.  It is so over the top, so ridiculous that if you are going to watch you have to just go along for the ride and enjoy every silly moment. 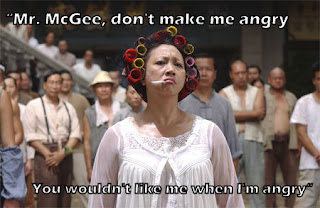