The Tale of a Man: Barry Lyndon

Stanley Kubrick is the master of the hypnotic film.  I didn't really know what to expect into his excursion across the classes of the 18th century, but like The Shining and 2001 and Eyes Wide Open, his set pieces and long takes and paced action by worn people can't be set aside easily.  They lull you into a trance, so that the whole experience just washes over you until it's done and you say, "What was that about?"

One of the great aspects of this film that is different than others is his beautiful, natural scenes capped with gorgeous architecture.  So many scenes open with a picture that is a piece of art.  That only preps us for the orderly, mannered society that we are to enter into.  Mind you, the world is terribly violent, immoral and, at times horrifying, but it is all done in a stately manner, paced, even and polite. 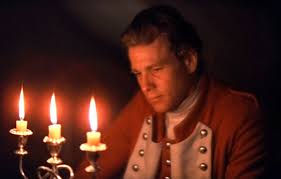 What is the film about?  Honestly, I think I'd have to watch it again to give a semi-complete response.  But, as the title suggests, it is about a man-- and, in a sense, all men.  We see the rash nature of a young man both at the beginning and the end, implying that this is a cycle that is repeated in many men-- perhaps all men.

We begin our manhood in youth as rash, bold creatures, not really knowing what we want or what our lives are going to be about, but we are ready to commit our lives and make any sacrifice (even others' sacrifice) for our whims.  When we fail, as we inevitably do, we seek stability, but by our own terms, no matter how unwise we are.  If we are uncomfortable, we rush to the next opportunity.  Soon, we seek ambition.  This ambition might be power or lust or wealth or notoriety, but we claw for it, and hurt others to obtain our ultimate desire. 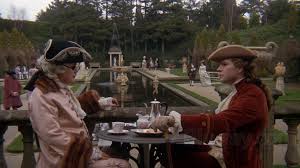 Finally, after some ambition has been reached, we might give in to our most hidden fantasies, but then we will seek to establish the stability we sought for all along.  We might be harsh in this action, and we might whittle away what good will and resources we have in this endeavor, but the long term goals will be reached by hook or by crook.

Some men actually achieve their long term goals, the stability they have worked so hard toward.  But many men only obtain the wisdom gained through the attempt.  The wisdom that to create something long lasting in the world, the main tool we must hone first is ourselves.  Because without that disciplined, forged and sometimes tarnished tool, made to build others, not ourselves, then we will ultimately fail. 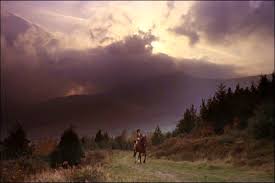 The amazing thing to me is that every step of Redman Barry's story is not just foreshadowed, but foretold, but this practice did not hamper the tale at all.  The voiceover narrative was soothing yet sobering, even as the rest of the story was.  This is master storytelling.  A tale-weaver who is so confident at his skill, that he can break one rule after another and yet still succeed.  This is easily one of Kubrick's best, if not his very best.

This film has been seen by far too few people.  I hope that will change as time goes on.