Passion Without Prejudice: The Mortal Storm

Frank Borzage is the master of melodrama, and who better to direct the forerunner to many of the best dramas that take place in Nazi Germany.  I could see this movie's touch on many other great films: The Sound of Music, Cabaret and Schindler's List among others.  Yet this film both deserves to stand with those films and is to be honored as a special film in it's own right.

The surprising thing is that despite it being a melodrama about Nazi Germany, there is almost not a single stereotypical character, or a character that doesn't have its own strengths and weaknesses.  There are bad guys, but the biggest evil is narrow minded ideology, or fundamentalism as we call it today.  Truly, this is an honest film and a bold one at any time, let alone a year before the U.S. entered WWII.  It is clearly anti-Nazi, but all the characters are German, whether good or bad or mixed.  And many of the Nazis are sympathetic.  Even though this was made before the propagandistic push of later years, it is still a strong statement. 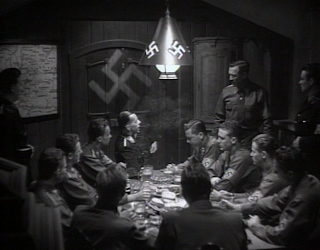 In this way, it is also the forerunner to films like, say, The Reluctant Fundamentalist, Zero Dark Thirty, or The Visitor, in which we are allowed to look into the face of a Muslim, even one who has some agreement with terrorism and to see different sides. It is a powerful experience when a film can take the prejudices of one's culture and say, "But wait, there's a human being under there."

In comparing it to the other Borzage films I've seen, it hits the same notes of effective melodrama.  I knew the scene with the bridal cup was coming, but when it came it still got dusty in the room.  I didn't expect the end, though I could have.