How do you know if it is a foreign language film or not?  Doesn’t it depend on which country you are in? If you are in Japan, Kurosawa isn’t a foreign language film and Jaws is.  The category, for me, should be called Any Film Not in English.  Perhaps it should be re-stated Your Favorite Film You Watched with Subtitles.  And why specifically have a category for foreign language film?  Are they inferior and need some help up, a separate category otherwise they wouldn’t be voted on at all?  Hey, I just want you to look at my Favorite Film.  Yep, Foreign Language.   Just prejudice, that’s all.  Okay, enough of my rant. 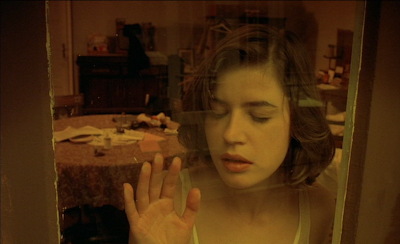 Apart from the many non-English films I’ve already mentioned in the 30 Day challenge comes my favorite film from the director Kieslowski: The Double Life of Veronique.  This film is a mood poem more than a cohesive narrative.  It is about two women with the same name: one Polish, one French.  But they share many characteristics.  I think this film is a spiritual and sensual masterpiece.  Difficult to understand, but in the end it just doesn’t matter.  Even if it cannot win you intellectually, it will win you with beauty of sight and spirit.
Posted by Steve Kimes at 6:26 PM