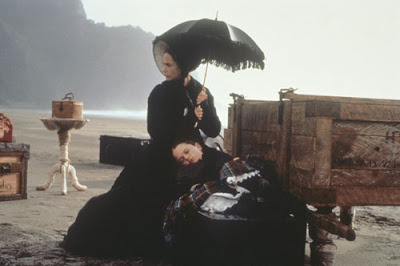 There are many films that are poorly made and confusing, but my least favorite film is beautiful and powerful—Jane Campion’s film, The Piano. I hate it for one reason: because it is the depiction of an ongoing rape and the victim falling in love with her abuser. I cannot bear watching so much evil over such a long period of time.

It's not so much bad as a film. There's a lot to recommend it. I just HATE it. HATE, HATE, HATE IT! If I never have to think about it again, it will be too soon. Although I know she is a good filmmaker, the name Jane Campion gives me an unsettling feeling in my stomach. I've disliked movies or thought movies were bad, but The Piano is the only movie that I despised from my core.

I almost felt that way about Inglorius Basterds, but I changed my mind.
Posted by Steve Kimes at 8:50 AM