Enjoying the Ride While Deconstructing It: Pulp Fiction

This review of Pulp Fiction contains spoilers. So if you are one of the four people who haven't seen this film, watch it then come back.

Technical—5/5—Despite Tarantino nay-sayers, I think that QT’s direction and imagination is top-notch. Yes, he certainly draws ideas and whole scenes from other films. However, the quality of shooting, the camera angles, the editing, the dialogue are all excellent. The acting is fantastic as well. Pulp Fiction is rightly called one of the best films of the 90s, no matter what the personal opinion of QT’s style is.

Interest—4/5—Although I was still fascinated by Pulp Fiction, my utter captivation was not present in this viewing. There is still a lot to appreciate. Sam Jackson’s monologues and his and Travolta’s banter is fantastic. The story is good and the twists still work. But some of the slower parts were more obvious. The long scene in the 50’s diner just seemed to deaden the pace, for example.

Tension—4/5—Knowing that Travolta returns at the end of the film eases some of the tension, but the story of Willis’ boxer is just as captivating as ever, especially the final scene.

Emotional—3/5—The tension is high, but the gentle touches aren’t as present here as they are in other QT films. 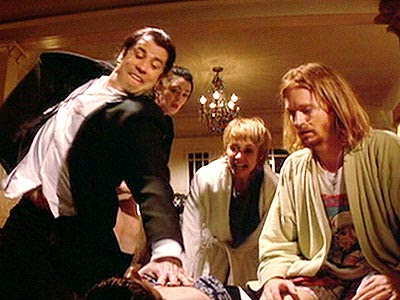 Theme—5/5—Humanity in violence. Jackson and Travolta are very violent, but that is not their core. Violence is their job, they “get into character” to be violent. Willis is a boxer whose job is violence and he wants to escape without violence. But it was not to be and the core violence in his soul is revealed. Violence can be damaging or it can be redemptive, but it is rarely inhuman. Finally, Jackson realizes that the violence was deadening his humanity, and so decides to escape it, completely. Which, in the end both saves his life and destroys Travolta. There is a lot to explore in this film along these themes.

Ethics—4/5—I think that the myth of redemptive violence is a grave error, one that is perpetuated by Hollywood continuously. However, violence is always more complex in QT films, it is both glamorized and questioned in Pulp Fiction. And Jackson’s “conversion” isn’t as simple as it seems in Hollywood films. The final scene is as complicated as any major life decision, in which ties are cut, then compromised, then a final decision is made. I don’t think that QT is the best one to open a discussion about the complexities of violence or conversion because the violence is so attractive, and the violent lifestyle seems, if not normal, then acceptable. The ethical stakes aren’t high enough, even if the plot stakes are. This doesn’t mean the ethical questions aren’t there, just as they are there in Inglorius Basterds. However, these films so easily lend themselves to a “switch off the brain and enjoy the ride” mentality, that makes it difficult to discuss them ethically. QT encourages this, even as he places the ethical element in them. I find this to be a double message, a hypocrisy in his films that is somewhat disconcerting—and downright frustrating in IB. Nevertheless, I don’t give up on the man. It is a brilliant hypocrisy.

Personal—3/5—I am not a violent man, but the humanity behind the violence is not foreign to me. Still, this film is not necessarily about the personal connection as much as the coolness factor.

I hate being in step with a broader trend, but I find myself agreeing with many others that I am getting a bit colder toward Pulp Fiction as time goes by. Perhaps that is the same with every film who’s basic heart is the “cool” factor. Awesome only lasts so long. I still like the film a lot, but it didn’t have as much staying power as the Kill Bill films. Still, I look forward to watching Pulp Fiction again.
Posted by Steve Kimes at 9:15 AM

Email ThisBlogThis!Share to TwitterShare to FacebookShare to Pinterest
Labels: Top 200